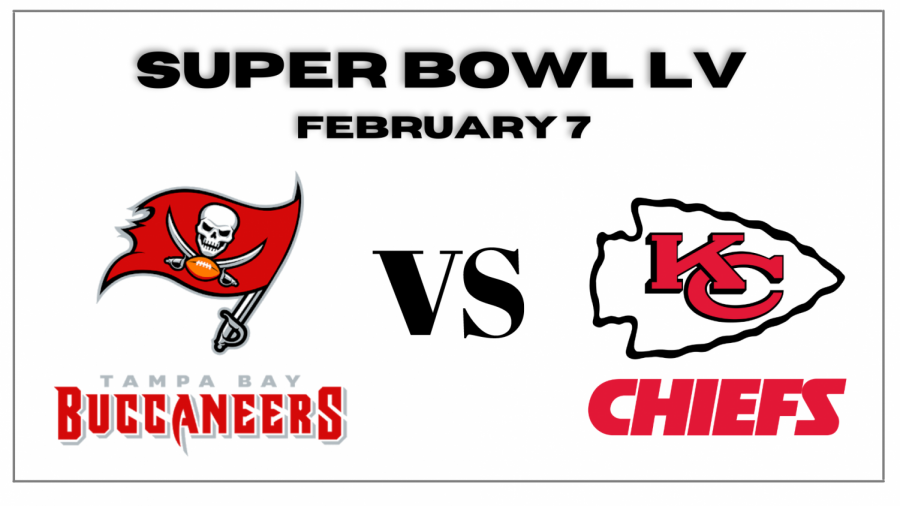 The Tampa Bay Buccaneers and the Kansas City Chiefs go head to head on February 7. (Graph made via Canva)

Super Bowl 55 is officially set for February 7 between the Kansas City Chiefs and Tampa Bay Buccaneers at Raymond James Stadium in Tampa Bay, Florida. It will be the first time in NFL history that a team hosts a Super Bowl.

Although many Edgewood students are not fans of this year’s contenders, most will still follow the biggest National Football League (NFL) game of the season. Sophomore Garrett Beckman predicts the Chiefs are going to win “because they are the best team in the league, no doubt.”

The Kansas City Chiefs are the reigning NFL champions after defeating the San Francisco 49ers in last year’s Super Bowl by a score of 31-20. The Chiefs are led by MVP candidate Patrick Mahomes, who has thrown for 4,740 yards and 38 touchdowns with only 6 interceptions. The Chiefs have been very successful in the league with Mahomes at quarterback, finishing first in the AFC. Beckman, a Cleveland Browns fan, said, “They are coming into this game fired up to get another championship.”

Junior Luke Smith believes Tom Brady will win his seventh Super Bowl. “Although Patrick Mahomes has been dominating, you can’t ever count the GOAT Tom Brady out,” as Luke described Brady as the greatest of all time. The Super Bowl seems more focused on Tom Brady than the NFC Championship winners, the Tampa Bay Buccaneers. The Buccaneers were the 5th seed in the NFC competing in all three previous rounds of the playoffs, including the Wild Card Round and defeating the Green Bay Packers in the NFC Championship. If Tom Brady wins the Super Bowl, he will individually have won more Super Bowls than any other team.

The whole world will be watching as the Kansas City Chiefs take on the Tampa Bay Buccaneers on Sunday.