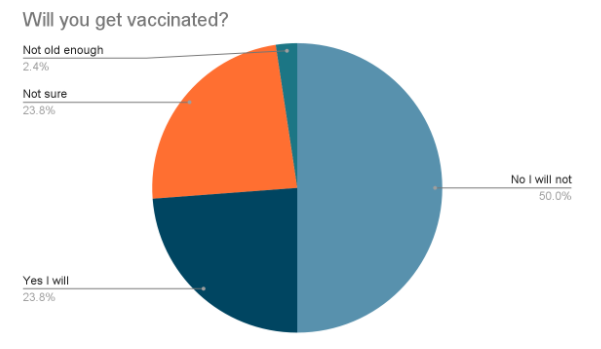 Results from the poll conducted on the @CougarPrints Twitter page.

Recently, the vaccine for COVID-19 was opened up for all adults. As of now, scientists are still researching the effects of the vaccination on children. However, according to pharmaceutical companies, they’re hoping to allow vaccinations for kids 12-15. According to experts, the vaccines will be available for kids in that age range in early May.

Senior Emma Smith isn’t interested in receiving the vaccine. She is worried that there isn’t enough information on the vaccination yet,  “I think it’s safe for the most part.” However, Smith is not completely ready for her turn to get vaccinated, pinpointing her hesitation to not knowing “what it’s fully made of.”

Freshman Kohen Moore says, “Yeah, I think it’s safe.” Like Smith, Moore thinks the vaccine is okay for others, but not for him. He will “probably not” choose to receive the vaccine, saying that “[he doesn’t] want to.”

After polling forty-two people from the @CougarPrints Twitter page, the results reflected an overwhelming majority against receiving the vaccine. Some people were still on the fence, with 23.8% saying they were unsure. Moreover, 2.4% voted that they weren’t old enough. Despite the majority of the voters saying they will not get the COVID-19 vaccination, 23.8% said they are open to receiving the vaccine.

As Governor DeWine opens up the vaccination to other age groups, EHS students will be given the chance to receive the two doses of the vaccine. Ultimately, it is up to each individual whether they want to get the vaccine or not.