Samuel George has mixed feelings about the action film. 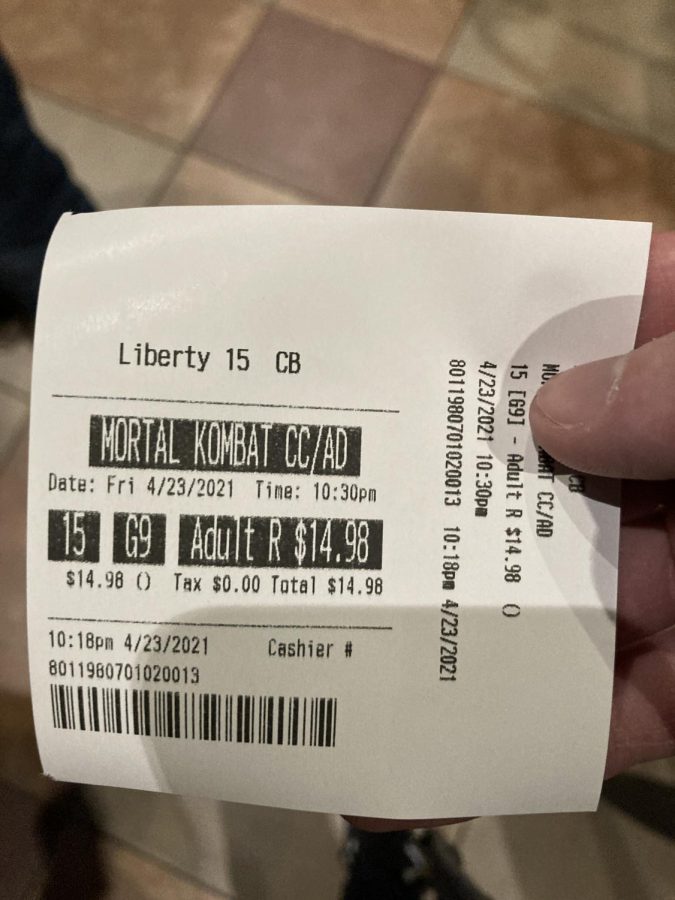 Samuel George stands in line for the movie with his ticket stub in hand.

Mortal Kombat is the newest blockbuster to be released in theaters. This over-the-top, action-packed video game adaptation will likely please fans of the source material, but for those who aren’t fans of the fatalities, they will probably be left wanting more.

The film was directed by first-time filmmaker Simon McQuoid. Written by Greg Russo and Dave Callaham, this is the first feature Russo has a writing credit for, while Callaham has writing credits for Wonder Woman 1984, and the upcoming Marvel outing, Shang-Chi. The film stars include Lewis Tan, Josh Lawson, Jessica McNamee, Chin Han, Joe Taslim, Hiroyuki Sanada, and Mehcad Brooks.

The story of the film is simple. Cole Young (Lewis Tan) learns that he has been chosen to fight on behalf of earth in an ancient tournament called Mortal Kombat. Over the course of the film, he must master his fighting abilities along with the other fighters of earth, such as Jax (Mehcad Brooks) and Kano (Josh Dawson), before Shang Tsung (Chin Han) and his champions kill them and enslave the earth.

The film does have some positives. The composer for the film’s score did a good job incorporating the famous theme song into the climax of the movie. The final fight between Scorpion and Sub-Zero, the two most recognizable characters from the video games, was quite a bit of fun to watch, and the fight was well put together. The movie also has some delightfully gory fatalities that fans are certain to be entertained by.

The film’s storyline felt rather rushed as well. Events in the film happened too fast for the audience to actually feel the gravity of each scene. Important pieces of information are often left out in favor of having a brisker pace.

For the most part, the action was also quite disappointing. The editing of almost every fight scene was so quick that you couldn’t really process what was happening, and you couldn’t see the choreography of the fights.

Overall, Mortal Kombat is a film that long-time fans of the video game will probably find entertaining, but for movie-goers who want to see more from their entertainment, they should look elsewhere.